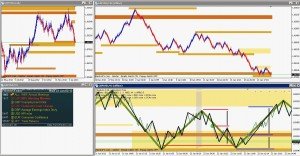 Just a little more insight into how easy I have managed to make WavEFX to follow. If you click this screenshot and enlarge it you will see 2 classic WavEFX trades, a trend continuation and a first confirmed wave turn. These were the first 2 trades of the day on the GBPUSD for January 22nd, 2013, let’s analyze them.

Firstly you will note the vertical Gray area on the bottom chart which represents the time I start my trading each day, 0700GMT. The first trade you will see is a trend continuation of the strong GBPUSD selling that had been going on for a while. All WavEFX trades follow 3 simple rules, good location of support / resistance, solid entry trigger, and intelligent risk:reward potential. This allows for an evidence based trading approach instead of guessing / gambling. This trend continuation trade follows all 3 of these principles, first price had returned to mirror flip off of a previous area of support that was now acting as resistance, you can see this using the top right chart. The entry trigger then sets up on the bottom chart black line where you can see the lower low and lower high, trading the break of that lower low now confirms a lower low, lower high, lower low sequence on that scale of wave activity. This therefore confirms that the area of support now acting as resistance is holding and we are now simply joining in with the majority based on evidence clearly displayed. The final thing to think about before entering is your stop loss and where you can conservatively expect to target for your profit.. also based on evidence. With this information you can assess your risk and potential reward before entering the trade. As with all WavEFX trades the stop loss is easy, it goes above that black pattern you used to enter. As for the take profit area, it can be conservative at a slightly higher low on the olive green line scale since we are following the trend of lower highs and lows. Can you achieve a 1:1 risk:reward or higher? the answer was yes and so this trade was a go.

The second trade on the chart is the buy that then followed which is called a first confirmed wave trade. In this case that simply means price came down and established a new area of support which you can see via the previous olive green low, then it retested that area to set up the potential of a double bottom scenario at that olive green scale. So now as that next black line entry trigger sets up you can justify the location based on evidence. An area was reacted from to establish support and then retested, the retest proves itself via the entry trigger which in this case is a higher low on the black line with an entry point that confirms a higher high. This of course means that at the time of entry you have a higher low, higher high sequence confirmed on that scale of wave activity. Your stop loss goes below that black pattern and the 1:1 risk:reward minimum is easily achieved based on the evidence. As a first confirmed wave turn style of trade you can expect the higher high on the olive scale and generally with this type of trade you can always target a 1:2 risk:reward or close to it. In this case a very conservative take profit would be to not expect a higher high and just take greater than the 1:1 but not quite 1:2. A reasonably conservative take profit would be the bottom of that opposing resistance box for a 1:2 as has been drawn on on the screenshot.

As you can see it is all straight forward but it is quite hard to cover all the details in a typed blog post. There is extensive help available to understand WavEFX with a VIP membership and I have spent a lot of time on it.. You can read all about VIP membership here

Theo Patsios has been trading the Forex Market since 2005 and providing Forex Trading Education since 2008. He is a specialist in Pure Price Action Trading with correct Risk Reward and Trade Management. If you want to learn more then get yourself started with a Free Membership at ElectroFX.com